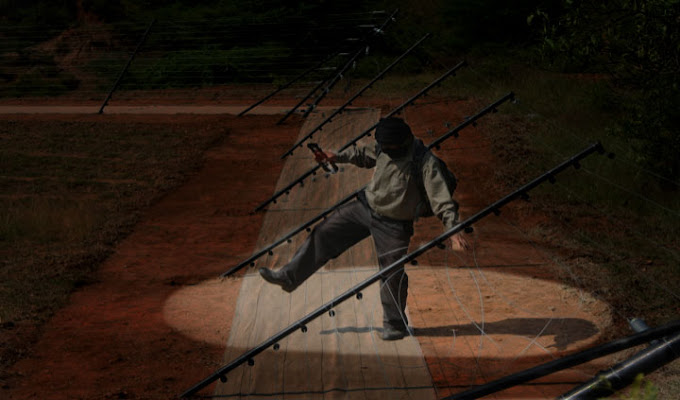 Conventional electric fences suffer a major drawback - it can be breached in less than 10 seconds, in the event of a determined intrusion attempt. The Intruder® Fence is an innovative concept which won wide appreciation for the superior delay mechanism it can potentially  present, buying valuable time for QRT action.

The threat perception is considered Very High, when determined intruders decide to pose a threat, even at the risk of being detected and eliminated. This outward leaning fence presents Depth as a deterrent, to prevent the determined intruder from stepping across, even after having cut a few lines in his crawl zone.

Modular, autonomous units can communicate with Sector Commanders and HQ, enabling central monitoring of infiltration prone sectors. This rugged fence scores on logistics, as in-situ soil can be used for grouting. The lightweight Intruder® Fenz can be easily transported and erected rapidly by trained teams of paramilitary personnel or  re-deployed with ease, when shifting camp. Intruder(R) Fence scores over opaque walls as the primary barrier at sensitive installations, as it affords visibility, eliminating the need for more surveillance equipment.

ALL RIGHTS FOR THE PHOTOES RESERVED TO FENZGARD PVT LTD

LOOKING FOR THE CUTTING EDGE IN PERIMETER PROTECTION?

Welcome to our host of services. We have a solution for your security problems.